Running – I don’t run fast. I don’t run far. I don’t win medals. Yet, I do compete. With every step I take and every mile I run, I compete against myself. Every night I set my alarm to get up and run in the morning, giving myself a little pep talk that I can/will do it. Every morning, when the alarm goes off I give myself another pep talk that I can/will do it. It is hard to get out of bed. However, I face the terrain, push myself mile after mile, uphill, downhill, and back home. I run because I love the sense of accomplishment I feel when I’m done, not because I feel like a runner. I try to lose myself in my music, headphones on, drowning out the voices in my head and my heart that tell me I’m not a runner. Recently, I’ve acquired a new running partner. He doesn’t accompany me on every run, but when he does I find I run better. I still wear my headphones, but solely for the music. This little person beside me doesn’t allow me to believe I’m not a runner…even for a minute. When I run beside him, I am a runner.

Why? He is my inspiration. I want my son to believe he can do anything as well. I want the voices in his head and his heart to always tell him he can/he will. I want to be his inspiration. 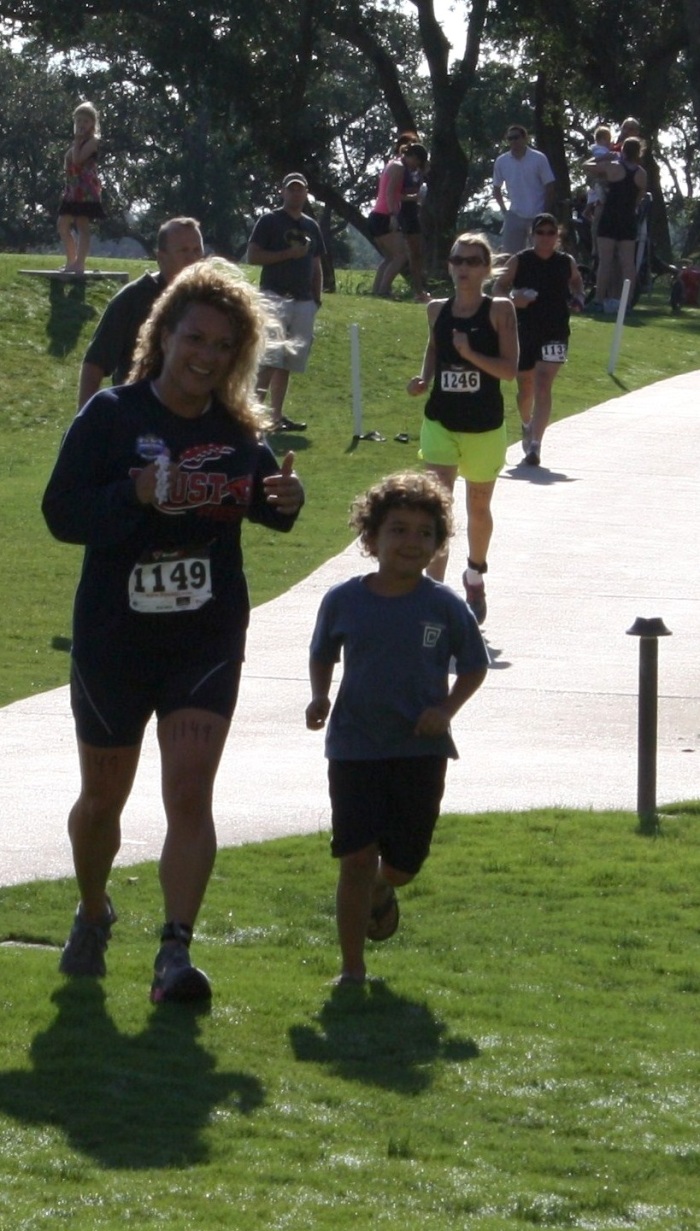 Writing – I’m not a famous author. I haven’t been writing long. I started this blog only five months ago. I don’t have books sitting on bookstore shelves waiting to be purchased. Writing isn’t effortless to me. I have to carve out time to sit and let my thoughts find life on my computer screen. Even with interruptions, as my fingers hover over the keys I work to translate thoughts to keystrokes to full-blown ideas on the screen. I write because I love to write. I write because when I do I lose myself in my thoughts and my words. When I write, I drown out the voices in my head and my heart that tell me I am not a writer. I write because I love the sense of accomplishment I feel when I’m done, not because I feel like a writer. Recently, my daughter has decided she would like to write a book. She says she wants to be a writer like her mom. I watch her sit with her laptop, a faraway look on her sweet face, her fingers traveling over the keys bringing her own thoughts to life. This little person beside me doesn’t allow me to believe I’m not a writer…even for a minute. When I see myself through her eyes, I am a writer.

Why? She is my inspiration. I want her to believe she can do anything as well. I want the voices in her head and her heart to always tell her she can/she will. I want to be her inspiration.

An (unedited) excerpt from Olivia’s book:

It was an ordinary day. Taylor was in her room texting her friend, Hannah. “Want to come to my party tonight?” said Hannah. “Definitely, but I’ll have to ask my parents!” replied Taylor, so off she went down the stairs. She went into the kitchen to see if her mom was there. Sure enough there she was making tuna casserole. “Um mom?” said Taylor “Can I go to a party tonight?”  “Absolutely not!” replied her mom “we are going to have a nice family dinner!”  “But mom please?” said Taylor. “No and that is final!” said her mom. Taylor stormed off outside to think. “If I’m not at that party I’ll be a total loser!” thought Taylor. Just then a portal-like thing appeared right in front of her! Before she knew it she was inside of the portal! She screamed, cried, and whined for help! “Mom!” she cried, but no one could hear her! Just then, she fell onto a bed of grass and flowers, but she wasn’t alone.

Tons of villagers had heard some commotion, and wanted to see what was going on. The villagers were angry! They were holding pitch forks and torches. Taylor immediately got up and ran ( even though she had no idea where she was going ). She ran into the woods and cried for help. “Help! Mom! Save me!” she screamed, but no one came. She kept on running, but she tripped over the root of a rather large tree. She fell to the ground, but immediately got up and kept running even though she was hurt. She soon realized the villagers stopped at the beginning of the woods because those were the woods that belonged to “The Destructor”. Taylor stopped and sat down. Her leg was throbbing in pain. When she took a look at her leg it was bleeding heavily. She grabbed a leaf and wrapped it around her leg. She looked at the size of the leaf and wondered ” Where am I?” Taylor didn’t know what to think. As far as she knows she was just sucked into a portal, and ended up in a weird placed where there were angry villagers. She was very tired, so she decided to leave the thinking for tomorrow and go to sleep. She curled up right then and there and went to sleep, but little did she know that The Destructor was on his way towards her.

Taylor woke up and saw a little creature sitting by her leg. It was about as big as a puppy. It was very fluffy and looked like a very small mammoth! It had purple ears and legs with an aquamarine colored fur. Taylor stared at the little guy with curiosity. “Ok now this is just weird!” she wondered aloud. She thought for a moment. Then she realized “If I follow him I’m sure to find water and food!”  Taylor had a little backpack that she always carried with her no matter where she was. She pulled out a little note pad and drew a sketch of the little animal. “Are you ok?” Taylor heard someone say. “Did you just say that?” Taylor asked the little creature. She looked up and saw someone, but it was no Destructor it was just a little boy. The little boy was wearing jeans, a long-sleeved t-shirt, and some sandals. He looked about six or seven. “Yes I’m fine, and who are you?” said Taylor. “I’m Peter, but the animals call me Pete!” Said the boy. “The animals?” said Taylor ( who thought the boy was insane and should just go home). ” I know what your thinking Taylor” said Peter.  “You what?” said Taylor. “I’m not insane.” said Peter. ” I can read people’s and animal’s minds, and that is why I said the animals call me Pete” said Peter. ” Oh I’m so sorry Peter” said Taylor. ” Follow me!” said Peter. So Taylor packed up her things and followed Peter through the woods.

As Taylor followed Peter through the woods she saw old abandon houses, broken down factories that looked like they had never been opened, she even thought that she saw a sparkle behind a tree or two. In other words, these were not the woods you would want to be in when you are alone. “Are we almost there?” asked Taylor. ” I think so…” Peter trailed off. “what’s wrong?” asked Taylor. “I’m not sure we are safe here, I-I can feel it” said Peter. Just then something jumped out of the bushes and took Peter. Taylor screamed, “Peter!!! Don’t leave me here!” Peter didn’t answer. He couldn’t answer because he was so scared it was like the whole world froze itself. Taylor knew she didn’t have to save him. It wasn’t her responsibility anyway, but Peter reminded her of someone who she couldn’t quite remember the name of. Taylor didn’t have all day! She decided to run after that beast that took her friend. Was Peter her friend? He never really seemed like one, but in a way he did. As she ran she heard a scream, a scream so loud it could make you completely deaf. Taylor stopped. It was the sound of a screaming boy.

33 thoughts on “Words I Have Never Spoken Aloud”