Just a little thing, he couldn’t have been more than six or seven with dirty blonde hair and big eyes that took in every detail of his surroundings as though his very survival depended on it. Maybe where he came from it did…I don’t know. I didn’t know his other world and had never experienced it. I met him in this world, my world. I was in my twenties and living life like a twenty something year old, with little regard for my environment and nary a worry in the world. My world was full of fast cars, good times, and excess around every corner. 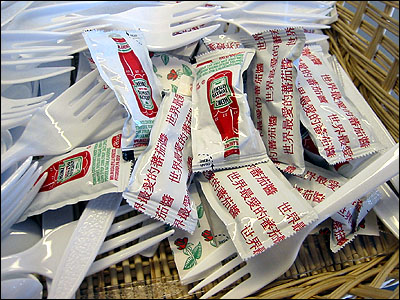 He entered my world on a Saturday afternoon, with his innocent face and those eyes that told a story of things I had only heard of in stories. I met his parents and older sister for the first time that day as well. We took them to a local restaurant for dinner that evening, and the adults around the table made conversation and future plans for this brave family. I couldn’t take my eyes off him. I noticed he cleaned his plate, savoring the cheeseburger as though it was a feast fit for a king. Between bites, those eyes took in his surroundings. I’m not sure he even heard the conversation. I, myself, was only picking up bits and pieces when I noticed him carefully placing ketchup packets in his pockets. One by one, he slid them to the edge of the table, glanced around and filled his pockets until they looked about to burst. I knew what those pockets felt like because at that moment a blurred vision of a true survivor came to life before me and my heart filled to capacity. I wondered how many ketchup packets would be enough? Did he know? Did he have a number in mind? How many would it take to make his heart as full as his pockets?

No one noticed the change in my emotions, nor the little boy’s actions that caused it. I remained silent, lost in my thoughts only glancing up to find him studying me. After dinner, I stayed behind and walked out with him. I told him he didn’t need to take the ketchup packets, but how do you explain to one so young that they will never go hungry again? How do you convince them that this new world he has just arrived in less than twenty fours ago, is one where ketchup will be presented to him in overabundance? How do you describe a feeling of contentment to someone who has watched everyone around him make do with so much less than my world is accustomed? There are no words, only experiences and actions that in time create the safety net he craved.

That little boy is a grown man now with a wife and two beautiful little girls. He is successful and lives a good life. I’m not sure he even remembers those ketchup packets…it’s been so long. I, however, have never forgotten. Every time I’m tempted to throw in some extra ketchup packets with my order I think of him and his full pockets. My heart fills with pride for the man he has become, and I hold on to those ketchup packets much the same way he did so many years ago. They are my life preservers too. When I think I need more, when I think what I have isn’t enough, I conjure up his ketchup filled pockets and the look of sheer peace that came over him when full pockets meant a full heart. And, I pray that my focus will always be on achieving a full heart…even when my pockets are empty.

Do you have a “ketchup packets” story in your life that serves as a reminder to you?

31 thoughts on “A Heart Full of Ketchup Packets”